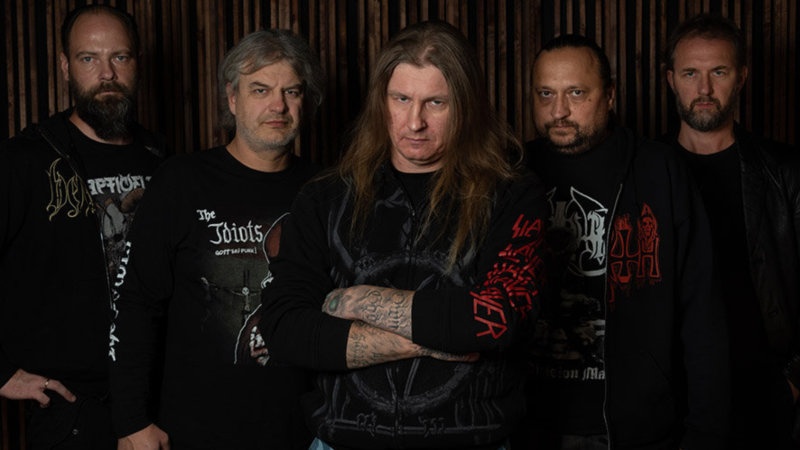 Tell me more about the birth of the band!

Stormgrey was formed in 2011 when ex-members of old school 90's Lithuanian Death Metal band Dissection - Raimonds Kieras (guitars),Lindas Remeika(bass)and Laurynas Sadauskass(vocals)joined forces with Arunas Mikolajunas (guitars)(ex-Dahmer,ex-Misopsychia)and drummer Victoras Mogilo - Zano.Just a few months after the formation we had opened for Voivod with brand new material.The great start was hindered by the unexpected leave of Laurynas but soon he was replaced another character from the Lithuanian scene - Rimtautas Piskarskas (ex-Grol,Burying Place).

With a strong line up established the band started to write songs inspired by true spirit of the old-school Death/Thrash bands like Sepultura(old),Obituary,Napalm Death(Death Metal period),Death(old),Benediction,Possessed and Slayer.Frequently playing local gigs Stormgrey soon established a rapid fanbase and owned 10 songs.Those were recorded in Muzlab studio(Vilnius),mixed and mastered by Dan Swano (Unisound)and came the debut album "Pray.Crawl.Suffer".Upon it's releasement by Vic Records in September 2015 the band played a couple gigs in Holland with Dead End.

The album got great reviews from the media and fans were headbanging like crazy.Unfortunatelly, the drummer Victoras Mogilo-Zano left the band in 2016 and later on passed away from cancer.This was a huge blow.We tried to call a new drummer Mantas (Sisyphean)but after 2 years it became apparent that it will not work out and during that time also the vocalist Rimtautas decided to step away.

Still the main core of the band was composing new songs and looking for a way to push forward.In 2018 which can be viewed as a new beginning for Stormgrey,finally it all came together.

Two another veterans from Lithuanian Death Metal scene from the 90s joined the ranks of old deathbastards -drummer Arunas Staugaitis (-ex Burying Place,Sullen Guest)and brutal growler Andrius Saulys (-ex Anomaly).Now with the most solid line up of their existence in the span of 1 year Stormgrey has hammered down 9 brand new tracks brimming with much more brutal and angrier approach.They were tracked down in Muzlab Studios by Paulius Simanavicius(Juodvarnis)in February 2020 mixed by Dennis Israel (Misery,Index,Siege of power,Exhorder)at Clintwork studios (Germany)and mastered by Jens Borgen at Fascination Street Studios (Sweden).The second album is called "DNA of chaos" and is a killer soundtrack for the currently fucked up world performed in the true form of old-school Death Metal by the longest surviving Lithuanian Death Metal players from the 90s scene.

What is your opinion about today's Thrash/Death scene?

What can I say...There are so many bands in these days,its impossible to listen to all of them.

Some of them are very good,some are not.

I see minus in nowadays famous bands.

They all sound the same.

I don't mean that the sound is not good,but I'm missing some life in it.

Tell us about your new album.Who are your favourite songs from it?

It's not easy to talk about album where I'm on vocals.

For me it's like a child and I can't say nothing about it.

I've heard and read a lot of good feedbacks about our album.

Some riffs are compared with mighty Obituary or Bolt Thrower .

For us it's the best compliments.

My favourite songs are "Grinder for thy flesh" and "DNA of chaos".

We will have few gigs in Lithuania in March and maybe play in some festivals and we are rehearsaling and creating new songs for our next album.

Thank you so much for the interview! What are you going to wish to your fans?

Thank you for your questions.